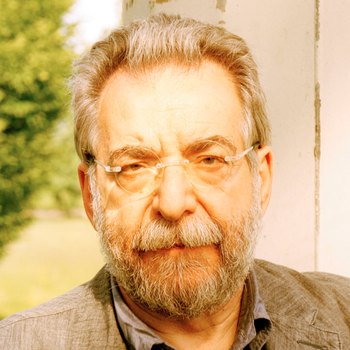 Born in 1948 in Varese to parents from Gela, Giovanni Chiaramonte began photographing at the end of the 1960s. He is dedicated to the relationship between place and identity of man, and the destiny of the West, with the volumes: Giardini e paesaggi, 1983, Terra del ritorno, 1989, Penisola delle figure, 1993, Westwards, 1996, Ai confini del mare, 1999, Milano. Circhi della città di mezzo, 2000, Pellegrinaggi occidentali, 2000, Frammenti dalla Rocca-Cefalù, 2002, Dolce è la luce, 2003, Abitare il mondo: EuropE, 2004, Berlin. Figure, 2004, Attraverso la pianura, 2005, Senza foce, 2005, Come un enigma_Venezia, 2006, Nascosto in prospettiva, 2007, In Berlin, 2009, L'altro_Nei volti nei luoghi, 2010-11.These works have been accompanied by texts by poets and writers Maurizio Cucchi, Milo De Angelis, Luca Doninelli, Umberto Fiori, Roberto Mussapi, Giovanni Raboni, Davide Rondoni and critical texts by Gianni Canova, Michele Cometa, Kurt Forster, Enrico Gusella, Silvano Petrosino, Elena Pontiggia, Arturo Carlo Quintavalle, Roberta Valtorta, Francesco Zanot. In 1983, he was called by the architect. Pierluigi Nicolin to collaborate in the magazine "Lotus International" and the following year, on behalf of the architect Josef Kleihues, he photographed the new Berlin built by the IBA. Berlin images are exhibited in the most important European and American galleries, including the Deutsches Architekturmuseum in Frankfurt, the Museum of Contemporary Art in Caracas, the Triennale in Milan, the Venice Biennale. The architectural photography of Giovanni Chiaramonte consciously crosses the parable of the Modern, analyzing the works of K.F. Schinkel, A. Antonelli, M. Piacentini, G. Muzio, G. Ponti, M. Van der Rohe, D. Pikionis, S. Lewerentz, P. Portoghesi, J. Nouvel, O. Niemeyer, J. Stirling, A. Siza, F.O. Gehry. Phil Johnson, Oswald M. Ungers, Kurt Forster, Mirko Zardini, Sebastiano Brandolini, Gianni Braghieri, Paolo Zermani wrote for his architectural photographs. On October 25, 2005, he was awarded an Honorary Degree in Architecture by the University of Palermo, for his twenty-year collaboration on the theme of the city and living with national and international magazines and institutions. In 2006, he was awarded the First Prize Friuli-Venezia Giulia for Photography and, in 2007, the Oscar for Photography of Benevento. Giovanni Chiaramonte founded and directed series of photographs for Jaca Book, Federico Motta Editore, Società Editrice Internazionale ed Edizioni della Meridiana, Ultreya-Itaca, accompanying his artistic work with a historical and theoretical reflection with essays and volumes dedicated to the authors closest to him, including Paul Strand, Minor White, Eugene Smith, Robert Frank, Paolo Monti, Mario Carrieri, Andrej Tarkovskij, Joel Meyerowitz, Wim Wenders, Robert Adams. From 1984 to 1998, he taught History of Photography and History of Optical Vision respectively at the Civic School of Photography and at the Civic School of Cinema in Milan. In 1998, he held the Course of Photographing the City at the Faculty of Architecture in Darmstadt. From 2000 to 2003, he taught Dramaturgy of the Image at the Theological Faculty of Sicily, and, from 2004, at the Master of Photography at Forma in Milan. After the Universities of Palermo and Parma, he currently teaches History and Theory of Photography at IULM University of Milan.

Dramaturgy of the image

The historical, theoretical and theological reasons of the Western canon from ancient theatre to the invention of perspective, lenses, photography, cinema and television.


Although IULM University takes all necessary care to ensure the publication of correct, updated and complete information, it is not responsible for the contents of the curricula published online on the Portal www.iulm.it. The holder of this curriculum vitae is the exclusive guarantor and responsible for the correctness and truthfulness of the information contained therein.