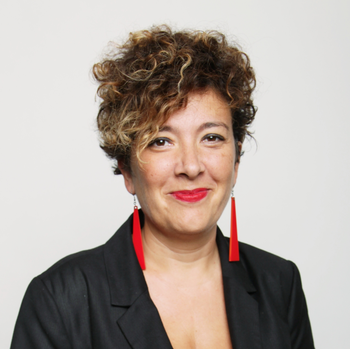 Graduated with honours in Cinema, Television and New Media at IULM, she received a training grant for teaching research in the discipline "History and technique of cinematographic language" of the course chaired by Professor Gianbattista Canova.
In the academic field, at the same time, she collaborated for the IULM University of Milan as tutor for the "Laboratory of Film Design and Production" by Bruno Bigoni and Erminia Ferrara and for the "Laboratory of Film Criticism and Writing for the Show" by Professor Gianbattista Canova.
She has recently participated in the start-up of @WebTG IULM, developing the format, organizing the work of students participating in the Workshop, training them from a theoretical and practical point of view and coordinating the implementation of the episodes under the supervision of Professor Gianbattista Canova.

Subsequently, she participated in a variety of ways in different types of communication projects related to new technologies.

*Editorially, she has participated in the realization of two editorial projects: "Dictionary of the Digital Economy" edited by Vito Di Bari published by Sole 24 ORE Libri and "And now that I have broadband what do I do?" edited by Daniele Bossari published by Carte Discovery.

*In the television sector, she worked as an assistant to authors and secretary of the editorial staff at Rete4 "Top Secret".She continued by participating in the start-up of the "3tv" taking care of the direction and implementation of services.
She has worked as editorial curator, producer and author of the thematic channel of travel on digital terrestrial "Viaggiando Tv".

*In the digital field, she was responsible for the conception, content, direction, screenplay and supervision of a project for 20th Century Fox Home Entertainment's Bluray entitled "switch to blue", which connected the web platform and its contents with 6 viral videos for the web.
She has recently worked with Hagakure as project manager, director and concept designer on digital multimedia projects for Ikea, Henkel, Unilever and McDonalds.
She is currently working as a Senior Consultant in the digital division of Community, a leading agency in public relations and communication for some of the largest groups and most important Italian entrepreneurs.

*In 2012, she won, with the association "PianoinBilico", the call for the development of youth creativity in Milan of the Cariplo Foundation, realizing the project "We want to live melting point". Give space to 14 theatre companies and 14 artists from the most varied forms of contemporary art and merge them together.

Bachelor of Science in Corporate Communication and Public Relations

- Tv, social media and the web

- Tv, social media and the web