NEGATIVE THEOLOGY AND KNOWLEDGE OF GOD IN MEISTER ECKHART 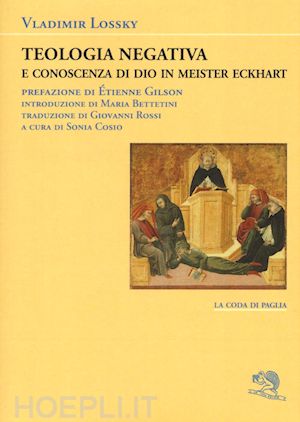 "Théologie negative et connaissance de Dieu chez Maîitre Eckhart", of which we propose a first Italian translation, is one of the most significant texts in the production of Vladimir Lossky, and one of the most interesting and successful attempts to reconstruct and interpret the theological and philosophical teaching of Meister Eckhart. Published posthumously in 1960, the study presents the theses of the Dominican master in relation to those of many other thinkers who have disputed the main issues of medieval philosophy and mysticism. The rigorous interpretation and ease with which the author moves through the places mentioned make the work very useful both for specialists, historians of medieval philosophy and mysticism, and for the readers who want to introduce themselves to Eckhart's thought. Echoing the synthesis of Etienne Gilson, we could say that the greatest merit of Lossky's study lies in his refusal to reduce the theology of the master of Thuringia to the systematic development of a single fundamental notion. The work, moreover, highlights how everything that can be said about the central notion of Eckhart's thought, namely God, must finally be denied, and God placed above all statements, in a positive investigation into the nescience of the divinity that represents Lossky's main contribution. Foreword by Étienne Gilson