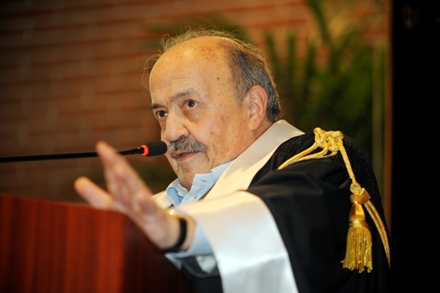 "The cultural versatility, the critical intelligence, the taste for irony, brought to the limit of self-irony, the ability to transform absolutely innovative experiences from pilot experiments into consolidated formats of great success and, even today, of great topicality, the ability to translate brilliant literary and creative insights into publishing products, the dedication of a life to one's own intellectual mission at the service of one's own country, of young people, for an ever more vigilant critical conscience, especially against all forms of abuse and prevarication, even mafia-like, represent in a single word the characteristic "figure" of Maurizio Costanzo: a fascinating reader and hermeneute of his time who has made his profession a mission of life and culture.

For these reasons, the Council of the Faculty of Communication and Performing Arts is unanimously honoured to confer on Dr. Maurizio Costanzo the Honorary Master's Degree in Journalism, Publishing and Multimedia, (class LM - 19 Information and Editorial Systems).