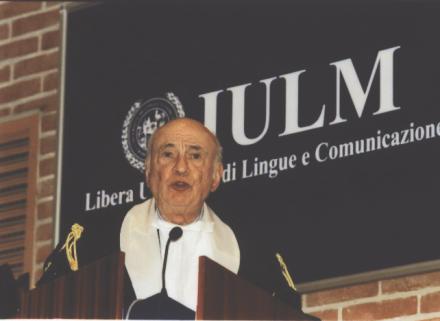 Edgar Morin, sociologist at the C.N.R.S., dedicated himself in the Fifties to research, which remained famous, on divism, youth and mass culture. He collaborates with political articles at the "France-Observateur" and then at the "Nouvel Observateur". In 1956, he founded the magazine "Arguments" with other P.C.F. transfugal intellectuals who have not abandoned the communist idea.

Then in 1967, with Roland Barthes and Georges Friedmann, he founded "Communications", of which he is still the Director. A spell at the Salk Institut brought him into contact with the theory of systems, which was to be the starting point for his subsequent epistemological research. He is a member of the Centre National de la Recherche Scientifique.

The motivation for the degree awarded by IULM University reads: "The degree is awarded to Edgar Morin, recognized as one of the most authoritative and illustrious masters of contemporary thought and cultural studies: he is the most significant model of free and enterprising intellectual and researcher, he is the lord of writing and speech. For this unparalleled contribution, Edgar Morin is awarded an Honorary Degree in Foreign Languages and Literatures.