“Design” is power. The dark side 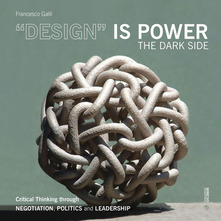 We are no longer used to critically examining the meaning of “design”, which maintains an unexplored dimension in terms of the power that can be exercises through the cyclic act of creation, preservation and disruption. This assumption induce us focus on the contrast between the “visible” side of the act that involves all its conceptual and practical manifestations, and a hidden or “dark” side that deals with politics and power play, but that however has an major influence in the process and its hierarchical dynamics. This implies an order on the surface seems to be naturally stirred by the so-called “perceptions” that reflect the preferences of overall public opinion: however, looking deeper, all the production acts involves a carefully controlled disequillibrium influenced by social, ecological, economic and political interests. The power flow in the act of “design” takes into consideration the paradoxical contradiction between its potentiality and its preservation of power.