It's all true. Martians, spaceships and media pranks 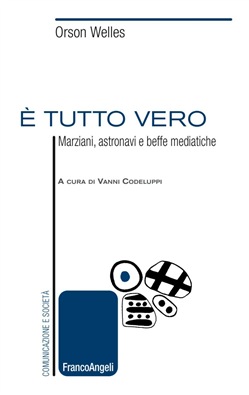 What role can the media play in generating situations of panic, confusion and alarm? This book draws attention to a case, in this sense, emblematic: it is built around the text of the famous radio broadcast that actor and director Orson Welles made with his company on the evening of 30 October 1938. A show based on the novel "War of the Worlds", in which the writer Herbert George Wells told the story of the invasion of the Earth by the Martians. It is probably the most successful and important media scam ever broadcast, capable of arousing a wave of powerful panic among many American listeners. Along with the full text of Welles' program, renamed by its authors "Invasion from Mars", the book also proposes an article written by journalists Alva Johnston and Fred Smith, which effectively describes the disruptive consequences that the Welles program had in American society at the time; in conclusion, an editor's essay analyzes the significant impact that the case of this programme has had over media studies and focuses on the fundamental question of the effects that they are able to produce.