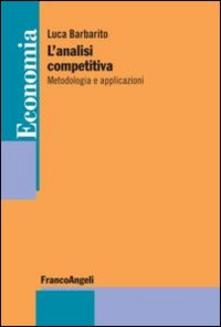 Political, industrial and business economists have always been interested in analysing competition. They have studied the markets, trying to understand, for example, how prices are formed, why some markets are more concentrated than others, or when and why some companies integrate vertically or horizontally. The object of the analysis is the study of a sub-set of companies belonging to an economic system, i.e. a specific "competitive arena" understood as the place where the competitive clash takes place. Competitive analysis is interesting both from a theoretical point of view, because it tries to explain some economic phenomena, and from an empirical point of view, because it allows us to clearly describe the characteristics of competition, showing a picture of the environmental context in which companies operate. This last operation is useful to different parties: to the Regulatory Authorities, to the Legislator, but also to the competitors themselves who, before deciding which strategies to undertake, must know the competitive area in which they will move. The purpose is to provide a methodology of analysis of competition using the contributions of industrial and business economists and some operational tools used by some consulting firms.